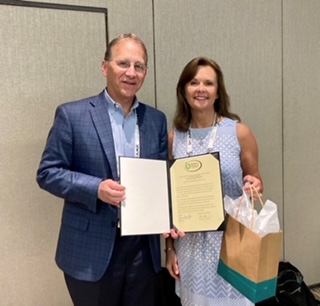 May 6, 2022: North American lead battery trade body Battery Council International (BCI) surprised a member of its top leadership team — Pam O’Brien — with an honor on May 1, in recognition of her “exemplary commitment and dedication”.

O’Brien, BCI’s senior vice president of operations, was publicly commended for her work at a special directors’ meeting, on the eve of the trade body’s annual convention in Florida.

BCI president Chris Pruitt (pictured with O’Brien) praised her work in supporting efforts to establish Women in the Global Battery Industry (WGBI) — an organization of professionals, founded to promote and develop the growth of women in the battery industry.

Pruitt said: “Her commitment to this program has exceeded that asked of her and demonstrates Pam’s full and complete dedication and passion to the industry as a whole, and to the industry’s goal of supporting the careers of women in the battery industry and STEM careers.”

WGBI president and chair of MAC Engineering, Julie McClure, who is a member of BCI’s board, proposed the commendation motion for O’Brien, who serves as WGBI’s director.

“Over the past year, Pam has moved mountains to take the WGBI from a concept presented to the BCI board by a small group of BCI members and staff to a fully-fledged and functional networking and professional collaboration group of industry women,” McClure said.

On May 2, McClure revealed details of the newly-formed WGBI, which was launched in January.

McClure said WGBI had grown to include 168 professional members and seven academic members. Of these, 75 participated in the organization’s first webinar, featuring a presentation from Nancy Martin of NRM Consulting on career development.